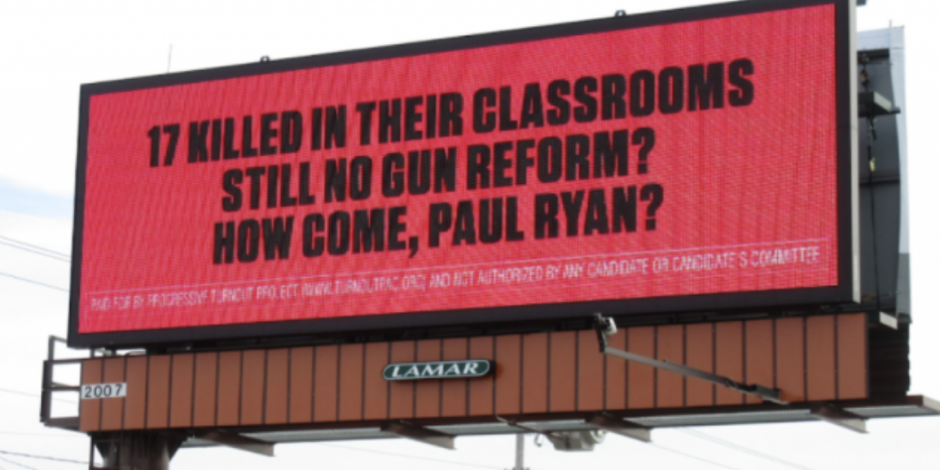 “How come, Senator Rubio? How come, Paul Ryan? How come . . . fill in the blank. How come now is a meme,” says Billups managing partner Rick Robinson, who lives in Los Angeles and frequents the movies.

(Meme, as in: “an idea, behavior, or style that spreads from person to person via cultural symbols or imitable phenomena with a mimicked theme.”)

The film is up for seven Academy Awards after sweeping the Golden Globes, Screen Actors Guild awards, and the British Academy on February 18.

In McDonagh’s film, the billboard asks, “How Come, Chief Willoughby?”

The chief, played by Woody Harrelson, was pressured to focus more on trying to solve a rape-murder case in small-town fictional Ebbing. The victim’s grieving mother, played by Frances McDormand, bought three billboards to make the case unavoidable:

AND STILL NO ARRESTS?

At the Billups agency, Robinson says the “how come?” meme channels the spirit of the film to match frustrations felt around the globe. The elements of the large-format ad — bold black-on-red lettering, straight-forward clarity, and a prodding question — reflect and also can express public angst.

An early manifestation of three-billboard meme occurred on the streets on New York on January 20, the one-year anniversary of Donald Trump’s presidency. Anti-Trump marchers carried three billboards, noted the Los Angeles Times. In a bit of foreshadowing, these marchers’ text ended with a question that would appear later: “How Come, Speaker Ryan?”

In Miami, activists employed the same high-profile tactic to question US Senator Marco Rubio (R-Florida) after a gunman killed 17 at a high school in Parkland, Florida. Days later, a black-on-red billboard (paid advertising) popped up in the hometown of US House Speaker Paul Ryan (R-Wisconsin), calling for “gun reform.

A media lesson from this phenomenon is: “if you want to keep something in the public eye, say it on billboards,” said Jodi Senese, chief marketing officer at OUTFRONT Media in New York.

Will the three-billboard tactic last or fade?

The billboard industry itself has worked to cheer the billboard movie during awards season. Out of home media companies have promoted the ‘Three Billboards’ film in Times Square, Los Angeles, and elsewhere with signs imitating graphics in the film.

As for staying power, Robinson at Billups shrugs that some phenomena last and others do not.

But stuck in the back of Robinson’s mind is another question, drawn from advertising lore: “Got Milk?”

“Got Milk? lasted a looonng time,” recalls Robinson. “It was rolled out, mainly on billboards, and the question became a visual and language meme,” morphing into a multi-purpose query (Got Truth?). Creative ad copywriters at PETA (People for the Ethical Treatment of Animals) flipped the Got Milk? slogan against dairy: “Got Zits?”

For the moment, if you want to want to make a point that breaks through, the question is: Got billboards, three of them?

Originally published in The Drum. 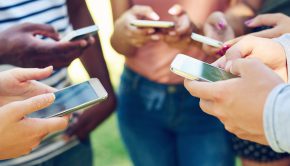 Why OOH Is the Most Trusted Influencer → 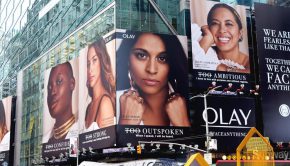 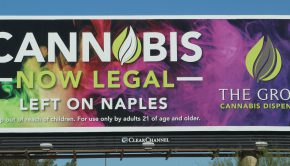